A statue of a Sioux warrior on a rearing horse, proposed and modeled by Serbian-born sculptor John David Brcin (1899–1983), realized by Matthew Placzek in the late 1920s for the entrance to the Joslyn Memorial.

The biggest commission Brcin has executed — and one of the choicest of his era in the United States — was for the Joslyn Memorial, Omaha, a handsome marble building with picture galleries and an auditorium adaptable as a theater, given by Mrs. Sarah H. Joslyn to be the city’s center for painting, sculpture, music, literature, the drama and cultural arts in general. It is a $3,000,000 structure, dedicated to George A. Joslyn, a pioneer “patent-medicine man” of Omaha who became the city’s wealthiest capitalist, founded various enterprises, including the Western Newspaper Union, and died in 1918.

Brcin’s job was to design and execute for the exterior walls of the building eight panels depicting western subjects. Four of the panels are devoted to Indians, including a buffalo hunt; two, to pioneers; and to, to the activities of Joslyn himself. These panels, the largest of which are 16 by 5½ feet, are not chiseled in special albs but in the pink marble masonry of the walls of the museum. The work occupied Brcin during 1929-1932.

Curiously enough, the commission for the memorial wanted “modernistic” designs, and Brcin turned for his “stylization” to the traditions of his native Serbia, whose outstanding contemporary master is Mestrovic. Brcin’s birthplace is within 50 miles of Mestrovic’s.

They say, incidentally, back in Serbia (now Yugoslavia) that Mestrovic’s Syrian Indians in Chicago’s Grant Park are not Mestrovic’s original idea at all. He sketched real red-blooded, red American Indians, and submitted his sketches to the promoters of the Grant Park statuary. They were disappointed — they wanted something typically “Mestrovic” rather than typically “Indian” — Indians are vulgar and commonplace out here, while Mestrovic is just too, too exotic. So we have the Grant Park Indians.

In his Joslyn Memorial Indians, Brcin quite successfully hit a medium between the Indian of Buffalo Bill and the Indian of Mestrovic.

While still at work on the Joslyn Memorial, Brcin was given a hurry-up call in 1931 to do a statue of heroic size of Cyrus Hall McCormick, inventor of the reaper, to be set in bronze, on a granite base, on the campus of Washington and Lee University, Lexington, Va.

Some ides of the schedule of which the commissioners of the statue worked may be gathered from the fact that the date of dedication was fixed, and the unveiling speaker chosen, before a sculptor had been found to design and execute the work.

Brcin arose to the occasion and —though among the difficulties encountered was the necessity of traveling with a good-size model of Inventor Cyrus to get the okay of a venerable relative in California — delivered the finished bronze on time.

Brcin was born in a mountain village of 500 people: Gracac, Serbia, Aug. 13, 1899. That’s Napoleon’s birthday, too, he point out significantly, and Mestrovic’s.

His father died when he was 2, and he was brought up by an uncle, a talented farmer, mason, and carpenter who spent his winter evenings whittling out crucifixes and other wooden images with a pocket knife. At 6 or 7, John David was helping him whittle, quite satisfactorily, only preferring goats’ heads to sacred images.

But whittling wasn’t to be his job in life, his uncle and other members of the family decided. He was to be a professor. An older brother of Brcin’s had come to America and was working in a bank at Gary, Ind. He still works there. So pursuing the idea of being a professor, John Dave came, when 14, from the village of Gracac, where educational opportunities were few, to the more promising center of learning, Gary.

Without a word of English, he entered the Gary High School, having got that far along in the gymnasium in Serbia. Progress was discouragingly slow, considering the fact that instruction was in English, and Brcin admits that the mastery of a foreign language is no cinch for him.

He became conscious after a while that he was the biggest boy in his classes, grew embarrassed, and transferred the scene of his learning from the Gary High School to Valparaiso University, where he could mingle high school studies with college work.

But his ambitions to be a professor were slowly frittering away. He read somewhere — maybe in a Serbian journal — that Mestrovic, blossoming into fame, had begun life as a boy carving goats’ heads and rams’ heads. He read somewhere else — maybe in one of his laborious English school texts — that Abraham Lincoln, ideal American in the imagination of most foreigners, had begun life with no more money than John David had in his pocket at that very moment.

So Brcin began daydreaming of an “art career.” He came into Chicago at every chance to roam through the galleries of the Art Institute. He admits without blushing that “The Song of the Lark” fascinated him, along with the paintings by Millet, particularly his favorite of all, “Bringing Home the Newborn Calf” (which many of us are fearful will land ultimately in the basement to keep company with “The Song of the Lark”).

These pictures, he knows now, were a sort of antidote for the homesickness of an exiled European farm boy, but that doesn’t freeze the warm spot for them he still has in his heart. On one or two occasions, he recalls, the guard, after watching him parked for an hour or more in front of “Bringing Home the Newborn Calf,” urged him to “move on,” being perhaps afraid the overly absorbed young foreigner might have some sort of designs on the picture.

Millet’s example became an urge to the “career” Brcin was thinking out, along with the examples of Mestrovic and Lincoln. Millet was a peasant, too.

At the Art Institute as instructor in sculpture was a fellow Serbian, Albin Polasek. Brcin crossed the Rubicon. He quit Valparaiso and his ambitions to become a professor and entered the Art Institute of Chicago to be a sculptor.

His progress was so satisfactory that in his third year he won the Bryant Lathrop traveling scholarship, permitting him a year in Europe, expenses paid. However, he was not yet 21, not yet a full-fledged American citizen. He waited, and then in 1922 took his year in Europe, spending a month of it back home.

But his boyhood friends had grown up into utter strangers. His boyhood sweethearts were dead or married. He felt homesick for Chicago as once he had for Gracac, and there was no remedy like Millet’s “Bringing Home the Newborn Calf.”

Brcin returned after his year, spent mostly in France and Italy, entered the Art Institute school for a year’s “post graduate” work, married Blanche Moore, a talented painter in watercolor, modeled his head of “Mark Twain,” got Lorado Taft’s letter, and was on his way. 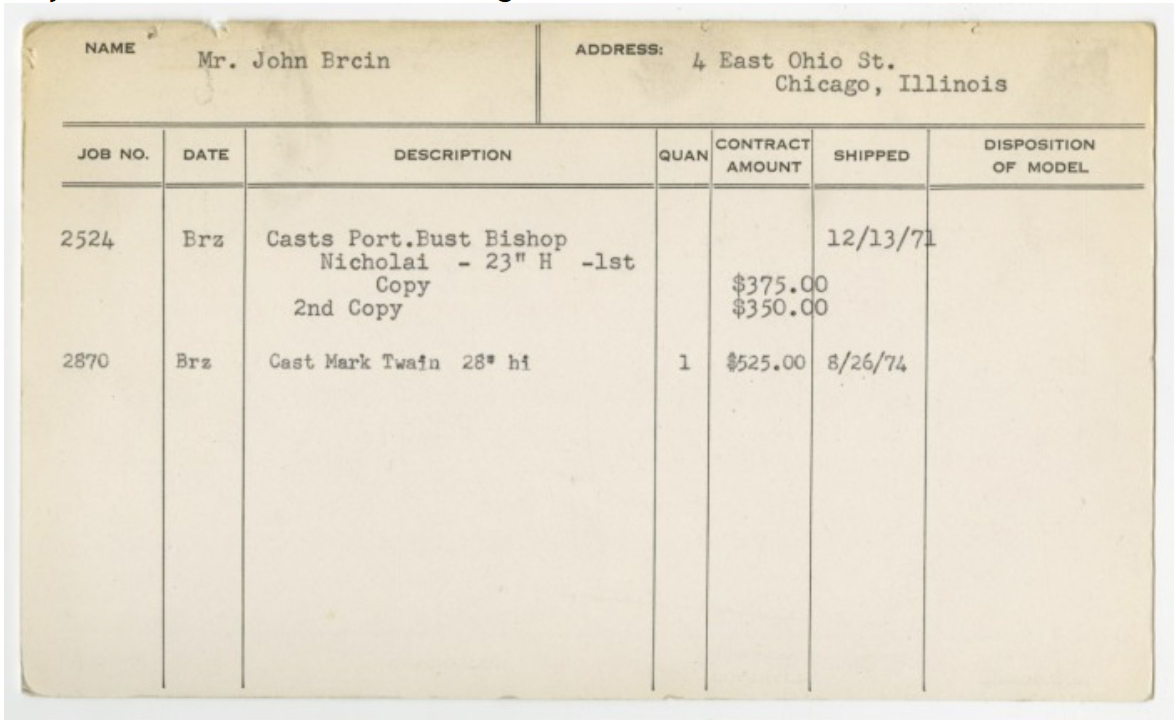 JOHN DAVID BRCIN CLIENT CARD – Bishop Firmilian’s Commission for two bronze busts of Bishop Nicholai one located at St Sava Monastery in Libertyville and the other at Holy Resurrection Cathedral in Chicago. 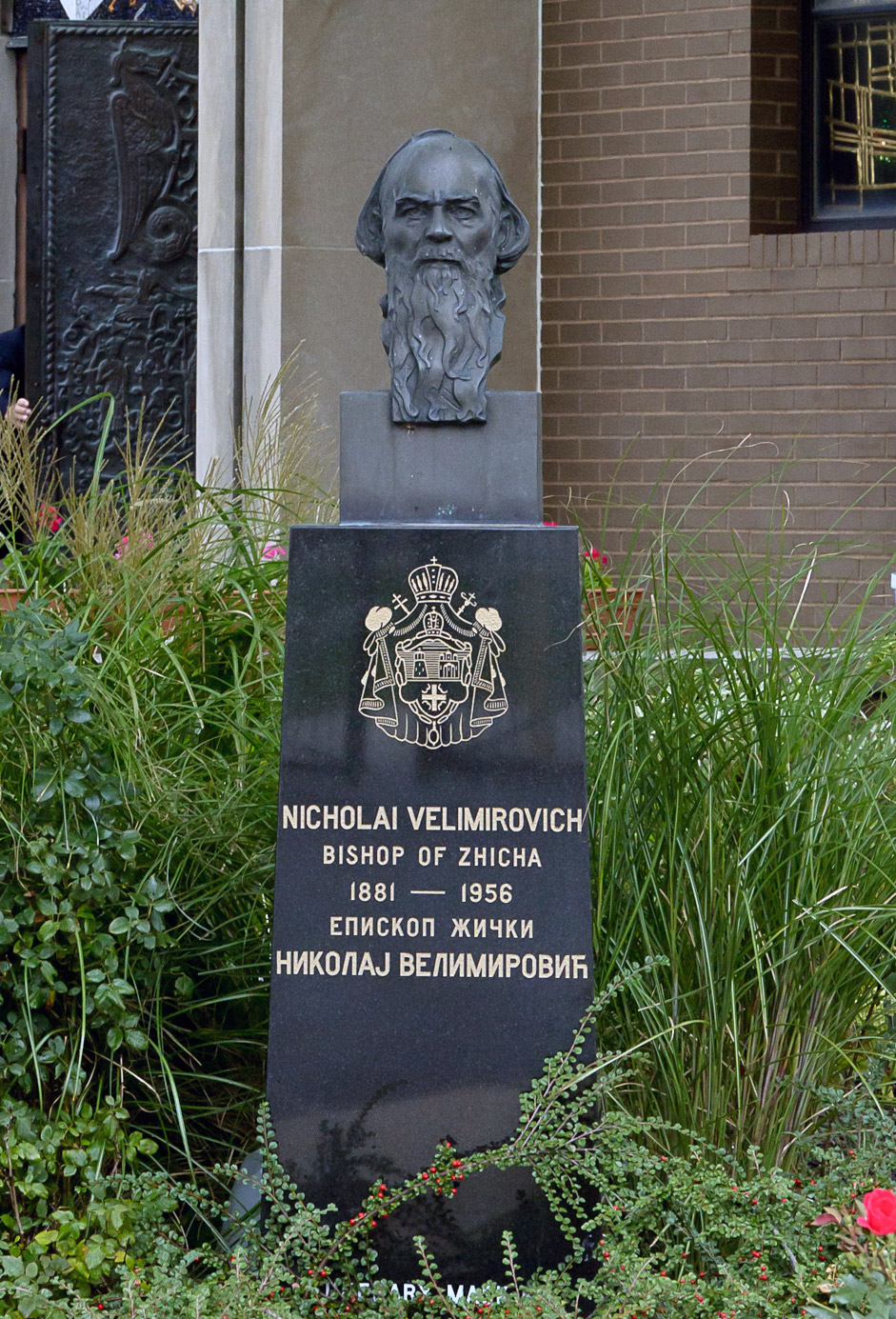 Dr. Stevanovic is a professor in the Department of Orthopaedic Surgery at the Keck School of Medicine of USC. He is known internationally for his expertise in problems of the hands and upper extremity. He has extensive experience working with patients with peripheral nerve injuries, trauma, burns, microvascular and rheumatoid problems affecting the hand, wrist, elbow and shoulder. He is also a leading authority in reconstructive microsurgery and limb and digit replantation.

Commentary on the Epistles of St. John the Theologian

This Commentary on the Epistles of St. John the Theologian - published now, three years after the blessed repose of Venerable Fr. Justin (on the Feast of the Annunciation, 1979) - was written by the tireless Messenger of Christ forty years ago, in circumstances similar to those in which Christ's Holy Evangelist John wrote his sacred Epistles.